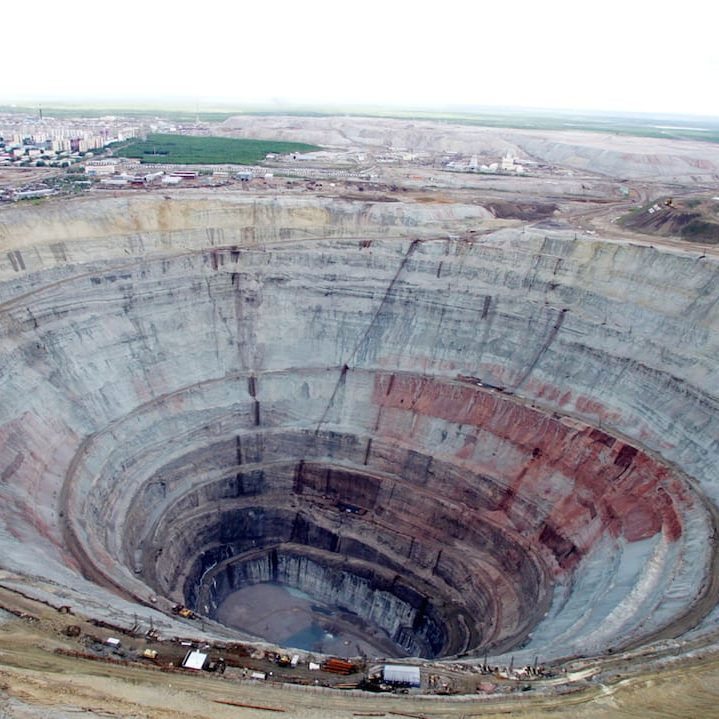 A comparative look at the impact of diamonds. Part two

This is part two of our blog on the comparative impact of mined and lab-grown diamonds, both on the world we live in, and the people who work in the business.  (See part one for the background, source materials, carbon emissions, energy usage, and how much waste product there is when you dig diamonds out of the ground.)

According to the Frost and Sullivan report (the only independent, like-for-like comparison we could find between the two facets of the diamond industry), the mined diamond industry uses 480 litres of water per carat, where lab-grown diamonds use 70 litres.   Taking a closer look, it’s clear that the more environmentally aware countries, (Canada, US, Australia, South Africa) are taking steps to reduce their water usage, where other countries are not. 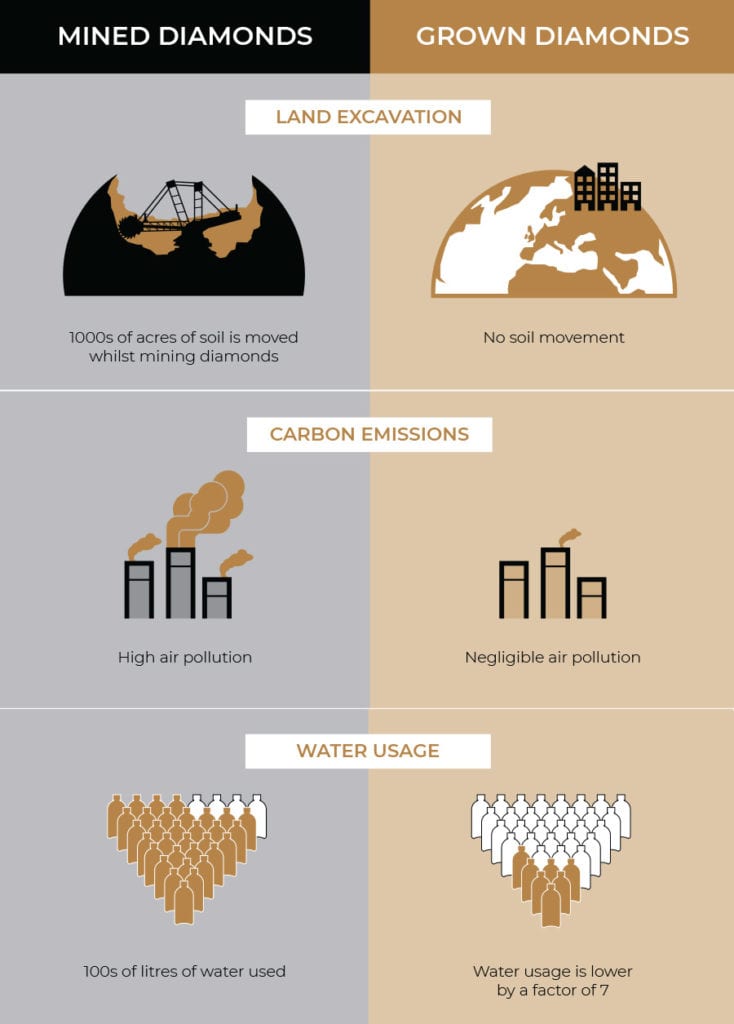 Comparison between Mined and Grown Diamonds

Our Ethica Diamonds use a tiny fraction of this, because the manufacturing process takes a fraction of the time that regular lab-grown CVD (Chemical Vapour Deposition) diamonds requires.

How do you measure environmental damage?  Do you look at the surface area of land destroyed to sink the mine or build the factory? Do you look at the damage caused to the water in the area around the mine, or to biodiversity, crops, and migration patterns of wildlife?

In this case, whichever way you cut it, mined diamonds are significantly worse than lab-grown diamonds.  There are numerous examples in our website and elsewhere showing the incredible amount of damage that is caused to the natural environment by diamond mining, even when they’re trying to be careful, and put it back how they found it once they’ve finished. 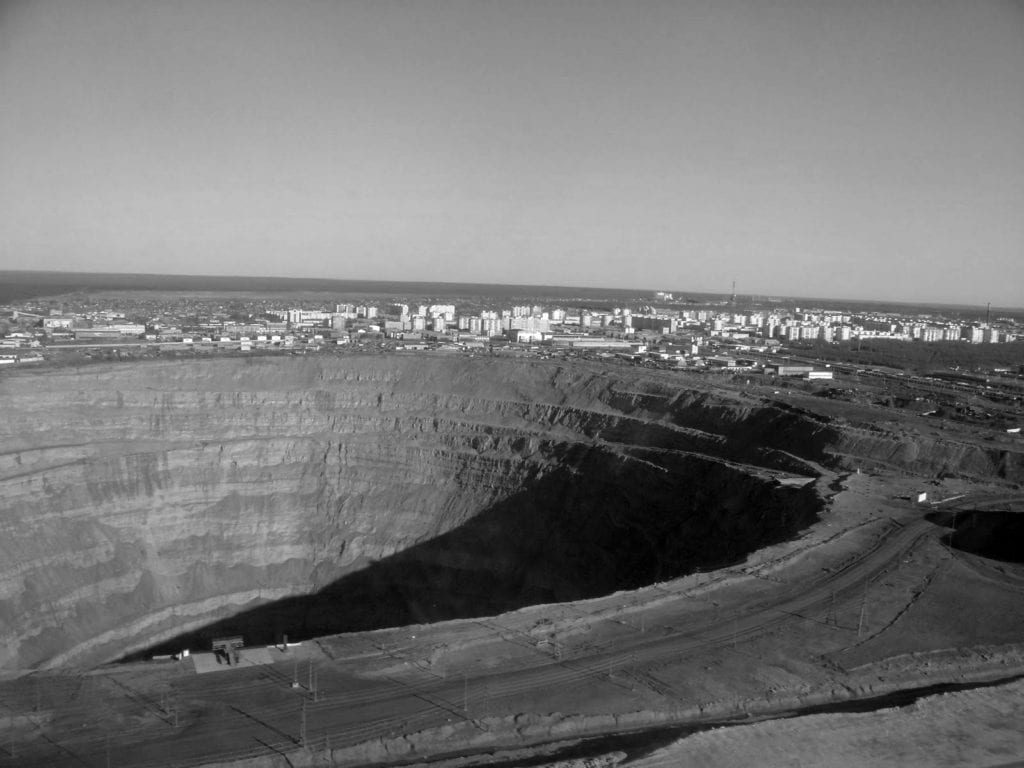 The Trucost report, paid for by the Diamond Producers Association, is very complimentary about the land-reclamation efforts of the DPA members, without mentioning that the 25% of the world’s diamonds are not produced with such care, and the environmental damaged caused by their efforts is significant.  For more information about this, see any reports about the Orinoco Mining Arc, in Venezuela, where the government has effectively declared mining activities about the law, and suspended normal environmental and worker protections.

Now this is an interesting one – the friends of mined diamonds will attempt to persuade you that the environmental damage can be written off against the fact that there are 10 million people employed by the diamond industry, including in some of the poorest countries in the world. They will tell you that the mined diamond industry is critical to the welfare of these people, that we would be condemning them to poverty if we ceased buying mined diamonds.

However, let’s look at the facts.

First off, if these people are in some of the poorest countries in the world, surely there’s something going wrong here.  Why is the country not benefitting from the diamonds mined within their borders?  Why are these people still poor?

The truth is that the mine owners and investors are getting very rich indeed off the backs of what is often little more than slave labour.  In some African diamond mines, the actual miners are paid less than a dollar a day, which isn’t sufficient for their needs.  They live in shanty towns, with little infrastructure (hospitals, schools, …) and there is often no alternative to working in the mine.  Children will choose mining over education (where there is any), to contribute to the family’s finances, and the cycle of poverty continues. 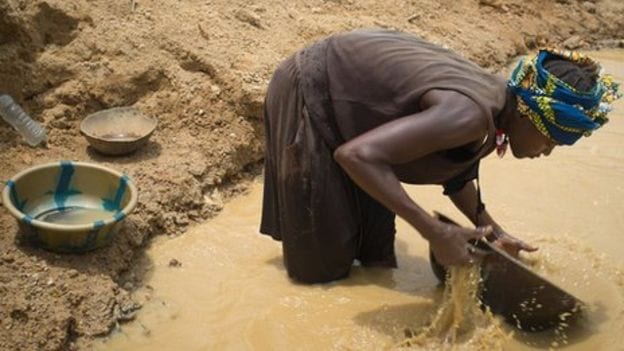 Working in a mine in a developing country is not a fun experience.  There are long hours, no health and safety considerations, no protective equipment, heavy loads, exposure to explosives, noxious chemicals, asbestos and dust, and also a high incidence of HIV in the workers’ camps. Given a choice, a real choice, would the workers remain there?

Another factor, for the people, is linked to the wider environmental damage.  If the forest where you hunted for food, or the fertile soil where you grew your crops, is damaged by the mine operations, what do you eat?  If the water source where you got your drinking and cooking water is contaminated by run-off from the mine, what do you drink?  If the worked-out mine is allowed to fill with water, how do you protect yourself from the malaria-carrying mosquitoes?

If the diamond mine owners were that concerned about the people who work for them, then they would be doing more about it than telling us off for claiming that lab-grown diamonds are damaging their workers. Those workers wouldn’t be living in poverty in the first place, to be complained about!

A drastic scenario that is sometimes given by supporters of mined diamonds is about what would happen if the industry were to close down overnight.  This is never going to happen, but it is certainly the case that lab-grown diamonds are on the rise, and the actual occurrence of diamonds underground is dwindling.  Many of the mines that are currently in existence are going to reach the end of their productive lives in the next decade or two, so there will be a need for the workers to find something else to do to feed their families in any case.  However, if people start buying more lab-grown diamonds, and fewer mined ones, then that process can be accelerated.

In comparison, lab-grown diamonds are created in labs, by highly trained staff, with sensible health and safety protection in place for the workers.  It’s not going to bring drastic wealth to a country, but it’s not creating a vicious cycle of poverty either.

The upshot of all this is that yes, there are grey areas in the precise definition of ‘environmentally friendly’, and ‘eco-conscious’, but there are some facts which you can’t really argue with.  Yes, people are more important than animals and plants, but you can’t write off vast swathes of environmental destruction by claiming that the people need the mines to work in.

We are confident that lab-grown diamonds are the future, and that this industry will be working to ensure that it is environmentally sustainable in the future, rather than resting on its laurels.

And we are also confident that the Ethica Diamond, with its unique ceramic core, is the best possible diamond alternative on the market, with a true eco-friendly hallmark, and credentials you can believe in.

Our Ethica Diamond is beautiful, strong and ethically produced