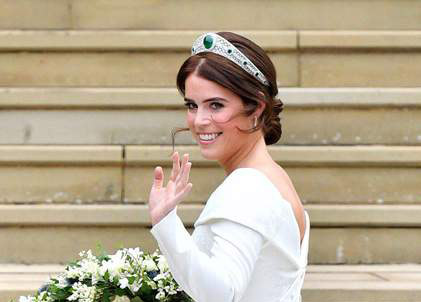 Another royal wedding – with tiaras!

There was another royal wedding last week, but was a little less prominent than Prince Harry and Meghan Markle’s in May.  Princess Eugenie (pronounced You-jhun-ee) married Jack Brooksbank on Friday 12th October, in the same chapel at Windsor as Eugenie’s cousin Harry, but although it made headlines, there has been a considerable fuss subsequently about Meghan and Harry’s baby news.  You have to feel a bit sorry for Eugenie, don’t you!

Well, first off, it was stunning, and very different to any other royal wedding tiaras we’ve seen recently.  No filigree here!

It is a ‘kokoshnik’ style tiara, made in the tradition of the headpieces worn by women in the north of Russia, and popularised in the Imperial Court. This particular example is known as the Greville Emerald Kokoshnik Tiara, and was made by Boucheron in 1919.  The original owner was Mrs Greville, a socialite and philanthropist, and she bequeathed it to the Queen Mother in 1942.  It now belongs to the Queen, who lent it to Eugenie for her big day.

The stunning central gem is an emerald, of 93.7 carats, and there are six smaller emeralds on each side, with brilliant and rose-cut diamonds, pavé set, in platinum.

It is a lovely piece of jewellery, and the emeralds went beautifully with Eugenie’s hair.

Congratulations to her and Mr Brooksbank, and best wishes for a long and happy married life!

When Meghan Markle married Prince Harry, she too wore a tiara loaned by the Queen.  Hers was originally made for Queen Mary, the present queen’s grandmother, in 1932. However it’s a very versatile piece of jewellery, with a central brooch that is detachable.  This was made in 1893, and is set with ten brilliant-cut diamonds.

The bandeau part of the tiara was designed to hold the brooch, and comprises eleven sections made of platinum, set with diamonds.

Meghan’s dress was elegant and a very simple design, so and her tiara matched that elegance of line and style. We think she made an excellent choice.

(Can you imagine royal brides-to-be being invited to tea with the Queen, and being taken on a tour of royal tiaras and asked to choose?   How would you even start??)

When Kate Middleton married Prince William in 2011, her tiara was the Scroll Tiara, or Cartier Halo Tiara.  This was another tiara that belonged to the Queen’s Mother, bought for her by her husband when he was still the Duke of York. After having it passed on to her on her 18th birthday, the Queen has apparently never worn it in public, but often lent it to her sister Princess Margaret.

The jewellers at Cartier spread diamonds around this tiara with a generous hand, using nearly 1,000 in the design, that’s 739 brilliant-cut, and 149 baguette-cut diamonds. The flower detailing here matched the lace-work on Kate’s dress, and complemented it very nicely, in our humble opinion.

Ladies in the royal family are not permitted to wear tiaras until they are married, and generally not before 6pm, except on their wedding days.  They are certainly a statement piece, and draw attention to the face in a way that few other jewellery items do.  Most people don’t have an heirloom tiara clattering around in their family tree, or have the queen as a member of their family to loan them one from her collection, but you can still have one if you want one – and there are no rules about when you can wear it, if you’re not royal!

So, does anyone want to commission one?  Go on – you know you want to!