The first of three blogs looking at the Canadian Diamond industry

Canadian diamonds are the ‘new kids in town’ in the diamond mining world.  Discovery of diamond deposits in the 1990s has caused a boom, and there has been a rapid growth of diamond mining in this area, meaning that Canada is now the third largest diamond producing country in the world.

The Canadian diamonds are marketed on their ethical credentials, proclaiming themselves the environmentally friendly, humanitarian choice.  However, is it really as good as it sounds?

People involved with Canadian diamonds talk at length about

So let’s investigate the Canadian diamond mines to find out more.

There are at present seven diamond mines in Canada.  We begin by looking at the two best, and then progress to another, less shining example.

Diavik Mine (below), 190 miles north of Yellowknife in Canada’s Northwest Territories, was opened in 2003. It produces 8 million carats annually, and is one of the largest diamond mines in the world. It’s currently transitioning from open pit to underground mining, and the mine is expected to continue production until 2020-2025.  It is making a name for itself producing bigger diamonds than anywhere else, at the moment, with a 552 carat yellow diamond found in October 2018.

Ekati Mine (below) is Canada’s first underground mine.  Also in Canada’s NW Territories, 200 miles south of the Arctic Circle, north west of Yellowknife.  It has produced 40 million carats between its opening in 1998 and 2009, from six open hole pits, before transitioning to underground mining. The expansion afforded by taking operations entirely underground means that the predicted life of the mine is until 2034, and beyond. 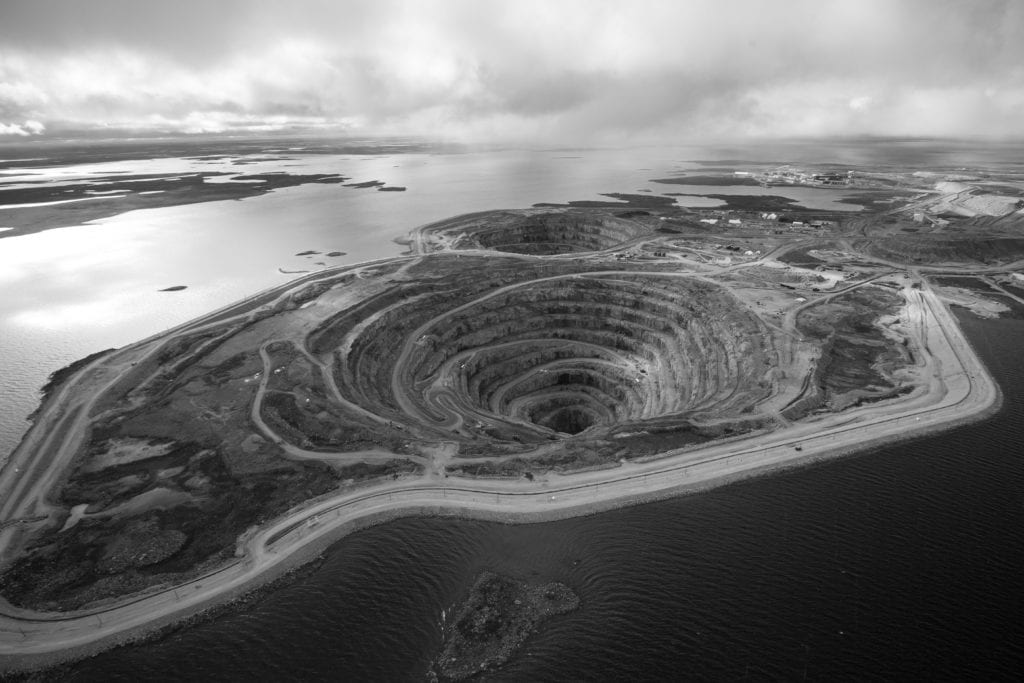 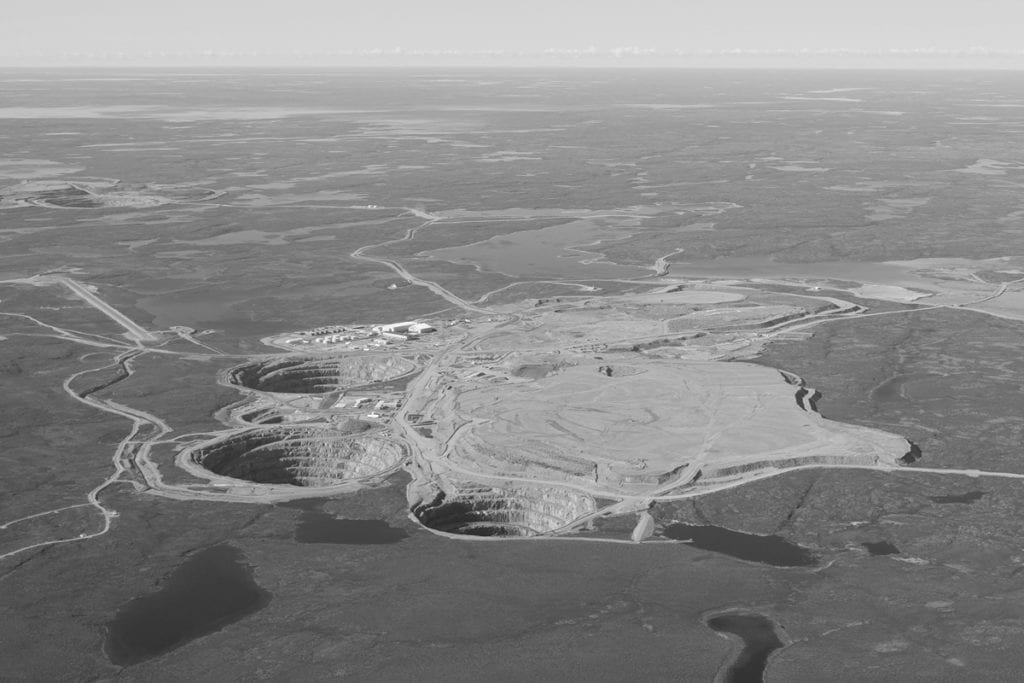 These two mines are held up as the finest examples of modern mines in the world.  They use modern methods, and seek to avoid negative impacts on both the indigenous peoples and wildlife. A good deal of attention is being paid to planning to return mined-out areas to ‘near to’ their original conditions.  However, in the period of time since mine construction began, caribou, for instance, will have had to travel for miles to go around the industrialised areas.  Will the traditional routes have been lost from the collective memory in the space of two decades?  It’s not possible to say, yet, as none of the mines have been closed down and returned to their natural state after that length of time.

What is known is that at present the caribou have to take a considerable detour to reach their traditional birthing grounds, which puts extra pressure on the pregnant females.  It has also been observed that wolves and other predators have become accustomed to using the mine roads to travel on, being fast and smooth, which gives them a new advantage over their prey.

And in any case, digging a huge hole into the ground is bound to cause a certain amount of disruption.  See previous blogs for more about the impact of diamond mining on the Earth, the water and the wildlife in the surrounding areas. 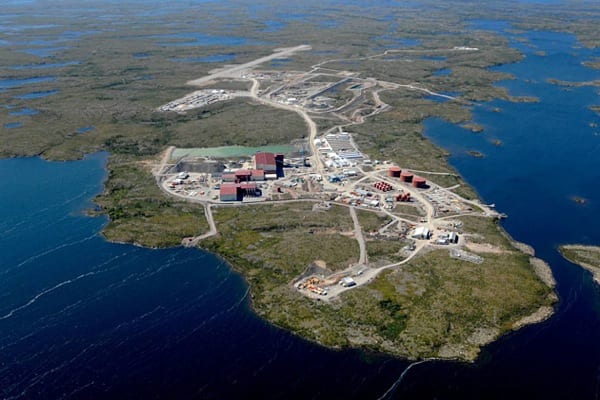 Snap Lake Mine (above) is not far from Diavik Mine, and was De Beers’ first mine outside Africa. It is Canada’s first mine to be completely underground, and was expected to produce 16.1 million carats across the lifetime of the mine, between opening in 2008, and the estimated end of its productivity in 2024.  It is a fly-in/fly-out operation, and De Beers are keen for everyone to know that they spent US$1.3 Billion with local contractors and suppliers, constructing it. However, De Beers announced in December 2015 that they were putting the mine into a holding pattern, ceasing immediate production.  Since then, the mine has failed to sell, had its assets stripped for other operations, been flooded, and begun plans for restoring it to its previous condition.

DeBeers explained that this was due to a drop in the price of diamonds, but there’s another factor at play.  The environmental legislation in Canada prevents the release of waste water into natural bodies of water if it contains more than a certain level of dissolved solids; mineral salts such as chloride. The Snap Lake operation had been storing water that contained a high level of dissolved solids, within the mine, as it was unable to release it. The regulations were relaxed by the territorial finance Minister, to allow more toxic water to be released, but the mine still closed. So releasing polluting elements into the water system, but closing anyway.

It has already been discussed in other blogs that there is a cunning loophole in Canadian Metal Mining Effluent Regulations that allows mine companies to dump waste-products into the waterways.  ‘Lakes’ and ‘rivers’ are protected, and the wildlife within them (see below for the spectacular Virginia Falls, in Northwest Territories, for an example of a protected waterways), but Schedule 2 of the Regulations allows for an area of water to be designated a ‘tailings impoundment area’.  You can put whatever you like into a ‘tailings impoundment area’! 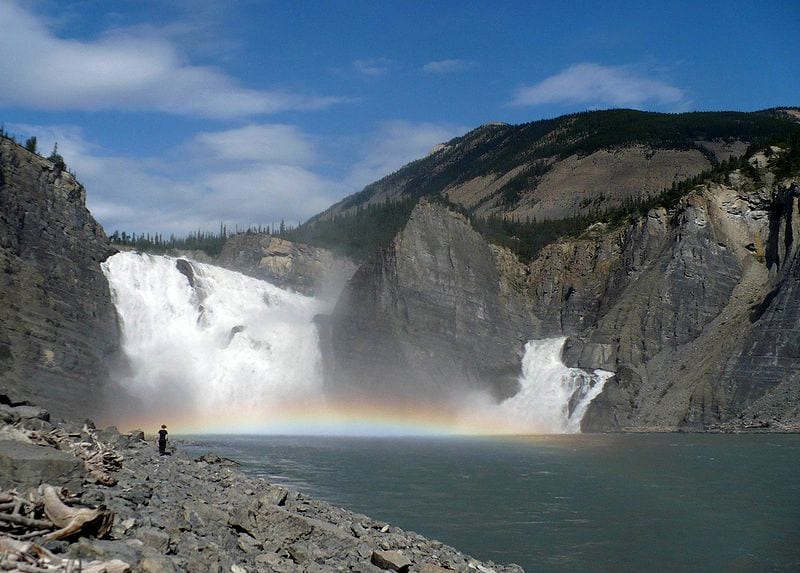 These are three of the diamond mines currently in existence in Canada.  For more, come back for our next blog about the Canadian mining industry, and read more about relations with the First Nation peoples of Canada, and restoration efforts after mines have closed.