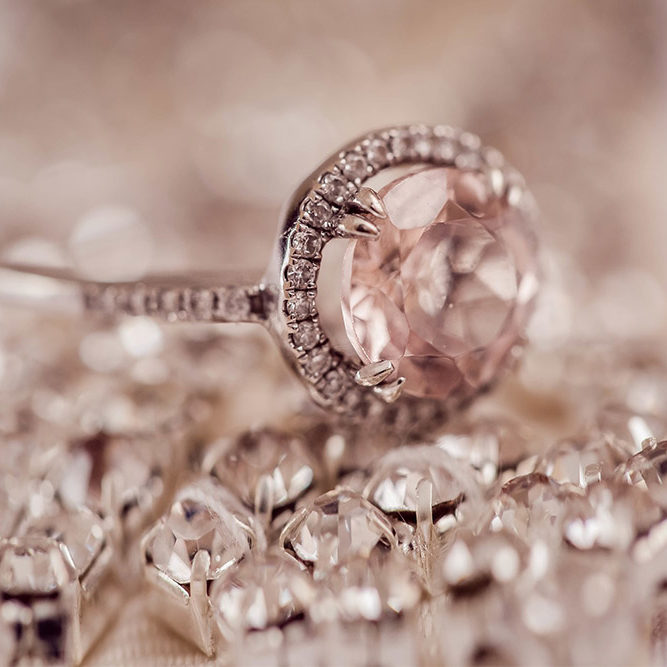 There have been a few fancy coloured diamonds in the news recently, with engagement rings and newly discovered stones creating a buzz about diamonds that are other than white. It’s a happy coincidence that Ethica Diamonds have also got a delightful coloured stone in our offices at the moment!  Ours is pink, so this blog is about pink diamonds.  It is possible to create lab-grown diamonds of other colours, so we’ll investigate those another time.

Coloured mined diamonds are anomalies. They crop up occasionally, in certain areas where the conditions for their creation existed millennia ago, and are very rare. There isn’t even any certainty  about what causes pink diamonds – the current theory is that extreme pressure (in addition to the pressure that creates diamonds in the first place) is responsible; perhaps a seismic shock. But no-one really knows.

However they’re made, they’re strictly categorised, according to three criteria, in addition to the four Cs by which regular diamonds are described. Jewellers use Hue, Saturation and Tone to describe coloured diamonds. Hue is the primary and secondary colours of the stone, saturation is the distribution of the colour, and tone is the darkness of the colour. Pinks range in hue from brown-pink to purple-pink. Ideal pinks exhibit only pink tones, without a secondary tone, and vivid pink usually better than paler pink. Darker is rarer, in mined diamonds.

The most expensive pink diamond in the world is the Pink Star (pictured below). Mined by DeBeers in 1999, in South Africa, it is a 59.6 carat Fancy Vivid Pink, the largest of that classification in the world. It was sold for 68m Swiss Franks by Sotheby’s in 2013, but the buyer defaulted, and the diamond remained with the auction house. It was re-sold in 2017, for $71.2m.

Lab-grown coloured diamonds of blue and yellow tones are created by introducing boron and nitrogen into the environment as the diamond’s lattice structure is created. However, with pink diamonds the process is different. The pink is introduced during the manufacture. This means that the saturation, hue and tone can be controlled, made to order, and the exact type of diamond that the customer requires can be created.

After the creation of the clear stone, the pink is introduced by a process of irradiation, showering the diamond with electrons and neutrons. This alters the diamond’s crystal lattice structure, and creates a pink centre. Following this, the diamond is heated, a process called annealing, which evens out the pink tone. Care must be taken after the diamonds is completed, as the pink tone can be disrupted by exposure to extremes of temperature, eg a jeweller’s torch.

If you love the look of pink diamonds, but would like yours with ethical and environmental credentials that stand up to scrutiny, then get in touch, and we can help you design both a stone and a setting for it that match your dreams.