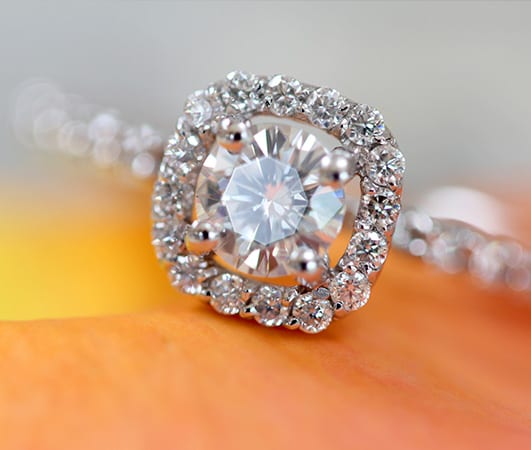 The mined diamond industry has been getting a little hot under the collar about non-mined diamonds in the last couple of years. There are articles popping up regularly in the jewellery trade press denigrating any version of non-mined diamonds, making clear that they’re ‘not real diamonds’ and wondering why anyone would want one, to be frank.

It’s interesting that they are so defensive, and so willing to pour scorn on a competitor, rather than doing more to deal with the reasons why such gems are gaining popularity in the marketplace.

The diamond industry’s major complaints are that ‘it’s not a real diamond’, and ‘you can’t tell that they’re synthetic’, which we shall deal with. What they really mean is ‘they’re stealing our customers and undercutting us’. At present, lab-grown diamonds account for around 1% of the rough diamond market, but that is predicted to grow to 15% by 2020, according to a report by Morgan Stanley in 2016, so it’s easy to see why they’re rattled!

Chemically, a ‘diamond’ is

“a metastable allotrope of carbon, where the carbon atoms are arranged in a variation of the face-centered cubic crystal structure called a diamond lattice.”

Therefore, diamonds which are produced in labs, consisting solely of carbon, are technically ‘diamonds’, exactly the same as the ones dug from the earth.

The structure of diamond, showing the cubic formation that makes it so hard.

Lab-grown diamonds created under the HPHT (High Pressure High Temperature) method or CVD (Chemical Vapour Deposition) method, are chemically identical to mined diamonds, as well as being impossible to tell apart even under a regular microscope. They are entirely composed of carbon, with a tiny seed diamond used to begin the process of ‘growing’ the outer layers, also carbon. The seed, by the way, cannot be seen since it is also pure diamond.

The Ethica Diamond uses the CVD, method, and a ceramic core, which means that it isn’t 100% carbon, although the bonded outer layer is entirely carbon. Our unique CVD mantle technique is patented too, and this technology is unique to the Ethica Diamond.

“You can’t tell them apart”

That’s kind of the point, we think. The new-generation lab-grown diamonds so closely resemble mined diamonds that they are impossible to tell apart, even inside a laboratory. However, the cost of a standard lab diamond is around 30% less than an exact equivalent mined diamond. (We’ve written a blog about the comparative costs of diamonds, wherever they come from, which makes interesting reading, we can promise you!)

Our Ethica Diamonds retail for around 90% less than an equivalent mined diamond, over 1.0 carats. They also take far less energy to create than an HPHT diamond.

The mined diamond industry is concerned that unscrupulous individuals may be creating diamonds in a lab, and selling them as mined ones, and pocketing the difference in price.

However, they seem to have missed the point that the primary draw of lab-grown diamonds is the ethical transparency. Why would we go to all this trouble to create an environmentally and ethically spotless synthetic diamond, and then be selling it as a dirty mined gemstone, betraying our ethical heart?

In any case, the Ethica Diamond, and other lab-grown diamonds will all be marked with serial numbers in inconspicuous places, to ensure that no-one can pass off the stone as a mined diamond.

What are they doing about it?

The mined diamond industry is continuing their crusade to ensure that people only want to buy their own stones. They’re investing in technology that can differentiate between mined and synthetic stones. And they’re trying to clamp down on people using the word ‘diamond’ in a way that they deem incorrect.

A report was presented to the Annual Congress of CIBJO (World Jewellery Confederation) in November 2017, calling for regulation in the naming conventions. The report’s writer, Udi Sheintal, President of the CIBJO Diamond Commission, referring to mined and synthetic diamonds, said, “That they are different products there is no argument. But how do we make certain that the consuming public understands this to be the case?”

The CIBJO wants to ensure that only diamonds created 100% naturally, ie without any human intervention, can be referred to as ‘diamonds’. They would prefer man-made diamonds to be referred to as ‘synthetic diamonds’, or ‘lab-grown diamonds’, although they have no legal powers to enforce the ruling. The mined diamond industry doesn’t like the term ‘cultured diamonds’, because to be cultured is to be sophisticated, and who wouldn’t be attracted to that!

And interestingly, the FDA ruled in July 2018 that lab grown diamonds are in fact diamonds, and should be known as such, although with the modifier ‘lab grown’ or similar.

At Ethica Diamonds, we’re very careful to refer to our Ethica Diamond as a diamond alternative, because we’re proud of that. No doubt CIBJO would be less happy that we differentiate ours from theirs by using the term ‘mined diamonds’ consistently, for the stones which are extracted from the earth, at huge environmental cost, in an industry rife with human rights abuses, and ethical issues. We really don’t want to be seen to be standing too close to that!

The mined diamond industry is also running a new advertising campaign, from October 2016, with the slogan ‘real is rare’. Interestingly, this is entirely hype – good quality mined diamonds are not actually that rare.  De Beers have kept mined diamond prices artificially high for decades, by restricting the flow of diamonds to the marketplace. Plus there’s nothing ‘unreal’ or ‘fake’ about a lab-grown diamond.

At Ethica Diamonds we are keen to show that our ethical practices, and environmental impact are a significant step above even from the regular lab-grown diamond industry, and you can read more about that on our comparison page.